I will let you in on a little secret.
The Connecticut Fiber Arts Collective is gearing up for a show (details to be announced later) inspired by the life and collages of artist --- 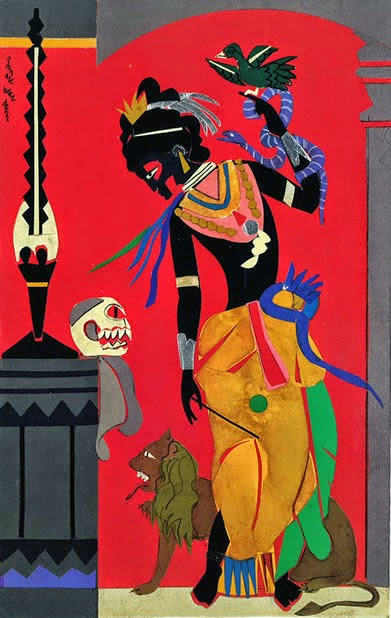 Bearden was born in 1911 to parents who were active in the Harlem community. Through his parents, Bearden met writers, artists and musicians of the Harlem Renaissance who later became major influences on his art and life. While studying mathematics at New York University, Bearden created editorial drawings for the Baltimore Afro American, Colliers and The Saturday Evening Post.
He later enrolled at the Art Students League in New York where he was encouraged to incorporate social and political commentary into his art.
After serving in the military and studying philosophy in Paris, Bearden returned to New York where he worked as a caseworker at the Department of Social Services and painted in his spare time.
In 1963 Bearden formed the Spiral Group, composed of African American artists who sought to make a contribution to the civil rights movement.
It was during this time that Bearden, who previously had worked mostly with paints, developed his collage technique.
In this technique, which was considered radical at the time, Bearden would create photomontages out of clippings from popular magazines, black and white photographs and pieces from his own art. He would then photographically enlarge the collages. Bearden chose a variety of subjects, ranging from the cotton fields of the South to the streets of Harlem and jazz clubs. This new collage technique, which he called "photomontage projections," represented a stylistic breakthrough, which Bearden continued to refine until his death in 1988.


These links will provide a little background information on the artist and you might also be inspired to create!
Posted by Mary Lachman at 4:58 AM

Please contact Rosalind Spann to schedule a group exhibit.
Contact individual members for solo shows.
In addition, many of our members are available for presentations and gallery talks.